We are a small group on the Eastern Shore of Delmarva that is part of a worldwide, non-profit, educational organization called the Society for Creative Anachronism.

The members of Spiaggia Levantina are many and varied, and change from time to time as new people enter our fair lands, and others depart for lands elsewhere. 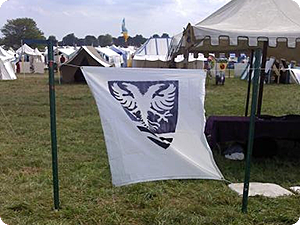 We participate in events local to Spiaggia and within the larger kingdom of Atlantia.  Join us at our next event!

We are a small group that is part of a worldwide, non-profit, educational organization called the Society for Creative Anachronism. This organization is devoted to the study and recreation of various aspects of the Middle Ages and the Renaissance. The focus for the Society for Creative Anachronism is the period from approximately 600 AD to 1650 AD. This encompasses the time from the emergence of the European continent from the so-called Dark Ages until the time when gunpowder came into widespread use. Geographically, we focus on the lands now know as Europe (including Eastern Europe), the United Kingdom, and Japan. Although other cultures are studied, of particular interest are cultures which were noted for their concepts of chivalry and honor.

Rather than re-enacting specific battles or historic events, we attempt to recreate the lifestyles and customs of the time period, including warfare, various arts and sciences, manners, and social roles. Also, we try to recreate the best aspects of the Middle Ages; no one wants to recreate the Black Death, or give up modern ideas of hygiene and medicine.

The world is divided into kingdoms, which are divided into smaller groups. The Eastern Shore of Delmarva is known as the Shire of Spiaggia Levantina — Italian for “eastern shore”. Until recently, we were a sub-division of a larger Barony. The Barony who supported us is called the Barony of Bright Hills and is based in Baltimore. The Shire of Spiaggia Levantina is a comparatively new group that has been growing quickly.

Just as was done in the real Middle Ages, our activities follow the seasons of the year. In the spring and summer, when the weather is warm, we enjoy many outdoor activities often centered around weekend camping events. Here we meet with our friends from all over the area to recreate many of the aspects of a medieval batle encampment, including combat and archery, dancing lessons, arts and crafts workshops, competitions of all sorts and, in general, having fun. In the evening we often feast, dance, sing and tell stories around a blazing camp fire.

During fall and winter, when the weather does not permit us to be outside we retreat into the castle, so to speak, and focus more on indoor activities. Most events we attend will feature arts and science competitions, large feasts and lots of dancing. As a group, we will spend our time fixing up old armor and making new pieces, working on garb (period clothing), and practicing and learning many new skills. We have people who are skilled in sewing, embroidery, brewing, armoring, forging (metal, that is), heraldry, music, chain mail making, archery, and other such things. Until the weather becomes too cold for the fighters to feel their fingers (unless, of course, we are able to find indoor practice space), we have weekly practice for those interested in learning the art of chivalrous fighting as it was done in the Middle Ages. We are always looking for people who are willing to learn skills from us, or to teach new skills to us!

If you would like more information about the Society for Creative Anachronism, The Shire of Spiaggia Levantina, and upcoming events in our area please feel free to complete our contact form, or contact the Chatelaine or the Seneschal.